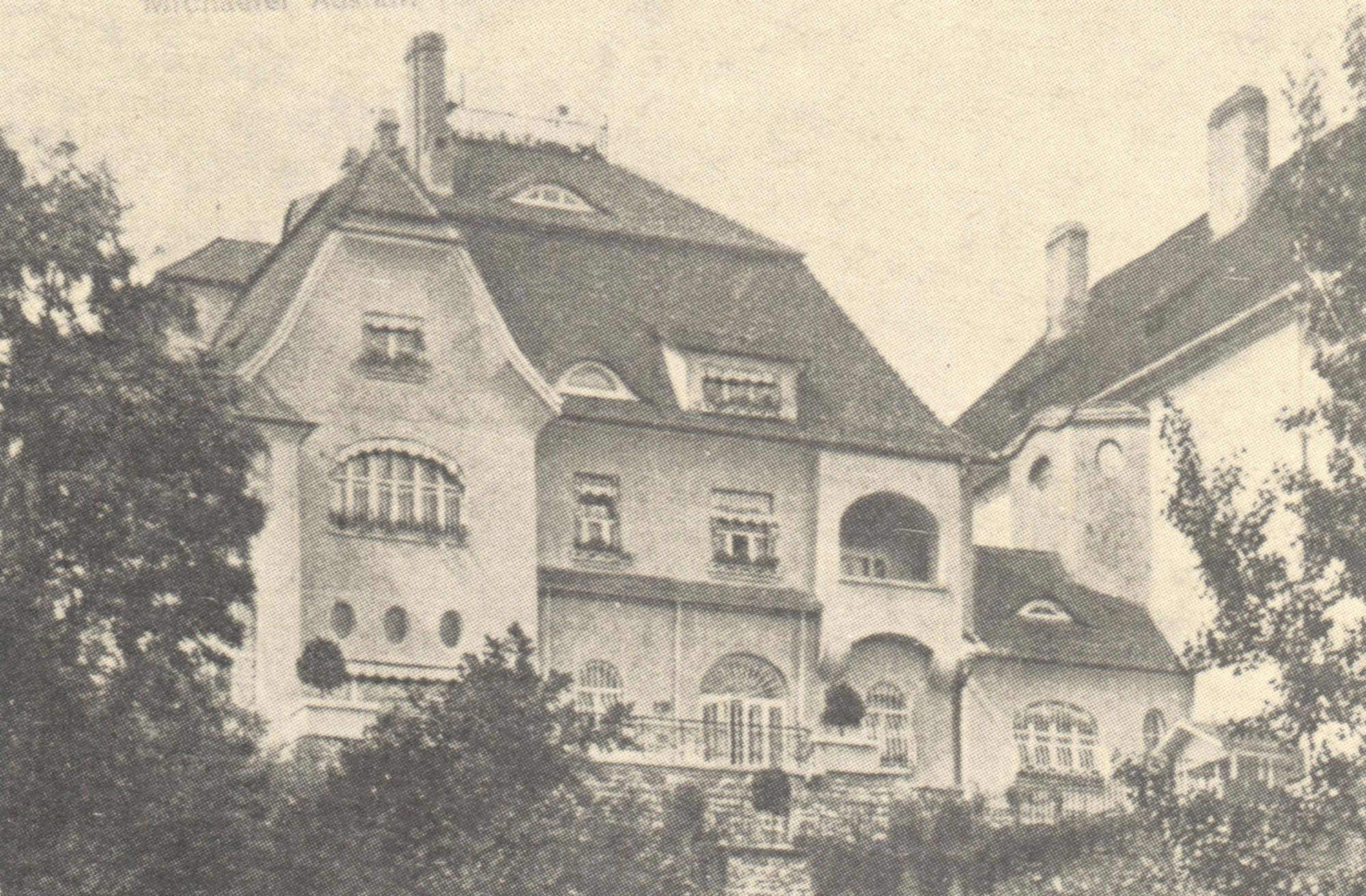 In the tortuous back-streets of the old Olomouc, behind a high wall stands a lonely gloomy building with a view to a park. The house is a silent witness that has watched the course of events for an entire century. This tepid but richly indented structure hides a history that is not too long, but rich with many reversions. Its time started to tick in the late eighteenth century, when the family of Paolo Antonio Primavesi moved to central Moravia from Lombardia. For five generations the family used to live in bourgeois houses at the Lower Square and operated there a small bank. With time the family gradually acquired both prestige and property. In the early twentieth century, the Primavesis became one of the most noted families all over Moravia.

It was in 1905 that Otto Primavesi and his wife, Eugenia née Butschek, a Viennese actor, decided to erect a seat that would conform to the family’s worthiness. Both were very interested in the then newly developing culture and entertained close contacts to the cultural centre of Austria-Hungary, a fact that enabled them to build their seat in a progressive secession style. The architectural design was prepared by the Primavesis’ long-time friends, the renowned architects Franz von Krausse and his partner Josef Tölk. The two architects succeeded in masterly combining the then prevailing secession style with modern trends and designed a richly indented, two-storey family villa with a high attic roof. While the building lacked decorations, it abounded in oriel windows and pinnacles; an adjacent small terraced garden opened to the Olomouc walls.

Dominant in the villa’s interior is a large hall situated on the ground floor and ascending partly to the first floor. The hall was conceived as the villa’s centre – responsible for its nostalgic touch was the huge stained-glass window with a wood engraving picture of the city of Olomouc of 1706. The hall served as a centre for family events. Glassed-in swing door led to a veranda with a view to the park. Side entrances connected the hall with the lady’s room and with the master’s room. The rest of the ground floor was taken up by a large panelled dining-room with a winter garden.
Access to the children’s rooms, the nurse’s room and bedrooms situated on the first floor was over a wooden staircase with a gallery. Servants and guest rooms were in the attic, accessible by a separate entrance and staircase.

Otto Primavesi and his wife actively supported fine arts and often invested large sums in the objects of arts. This is why their new seat was enriched by works of the leading artists of that time. These included Anton Hanak, a close friend who designed the dining-room’s panelling and a copper fountain „Viva Aqua“, a village night-watchman’s statue and a number of other works of art. Other noted artists who took part in the villa’s decoration included Josef Hoffman, designer and architect, and Gustav Klimt, painter.

The era of the Primavesi’s family in Moravia came to an end in 1918 after the disintegration of Austria-Hungary, which deprived the family of all its economic power. As the clan’s members believed in the original royalist order, they sold their vast property in Moravia and moved to Vienna. The Primavesi villa was acquired in 1923 by the Joint-Stock Rural Sugar Refineries in Přerov, a company in which the clan had interest. In 1926, the Sugar Refineries made the villa over to Dr. František Koutný.

Based on a project prepared by builder Julius Schmalz, Dr. Koutný had the villa rebuilt in the course of the same year into a private sanatorium. Severely affected by the reconstruction was the attic roof; most of Hanak’s works were removed, and two surgery rooms were built up. The ground floor was then used as a dwelling for Dr. Koutný’s family. The first floor housed eight rooms for women in childbed, and surgeries with large windows were built-up at both ends of the floor. Situated on the second floor were nine rooms for patients after abdominal and urological surgeries. Twelve nuns lived on the last, attic floor. After Dr. Koutný’s death, the private sanatorium no longer prospered and in 1939 it was sold to Dr. Robert Pospíšil, who was Dr. Koutný’s schoolmate and work fellow. The sanatorium functioned without any radical structural modifications as a stationary facility. In 1952 the private sanatorium was nationalised and included in the network of the state health care as an outpatient facility. This required considerable structural modifications, which resulted also in the removal of the rest of Hanak’s statues and of the furniture from the lady’s and master’s rooms.

In the eighties of the twentieth century the Primavesi villa was included among the cultural monuments of modern architecture, which resulted into the preparation of a project on its reconstruction, if possible, to its state at the time of its possession by the Primavesi family. However, the reconstruction had never started. After the revolution of 1989 the villa was returned to private ownership of Dr. Pospíšil’s daughter Olga Dvořáčková.

Unfortunately, the many years of socialist care left the villa in a very shabby condition. The first attempt aimed at its salvation and reconstruction into an entrepreneurial club by the Primavia Company failed up, and the firm brought the villa to the verge of collapse. The villa was left unsecured, without doors and windows and without all historically valuable works of art. The latter were delivered to unknown restorer shops. After the bad experience with investors the Dr. Pospíšil’s granddaughter, Pavla Honzíková, started to repair the villa in 1996 at her own expense.

She received a state subsidy of 250 thousand Czech crowns for the repair of the villa, which at the time was in an emergency condition. After several years of arduous searching almost all historical objects of art were found, and the villa began to wake for its new life. Today the attic floors are used for flats and other floors as company offices. The historically valuable floor is partially open to public in the form of the Primavesi Gallery.

The groundfloor, which originally served as technical bagground of the house, was turned by Jana Lerchova, after extensive reconstruction in 2008, into a stylish restaurant which has been waiting for a new keeper.

Any cookies that may not be particularly necessary for the website to function and is used specifically to collect user personal data via analytics, ads, other embedded contents are termed as non-necessary cookies. It is mandatory to procure user consent prior to running these cookies on your website.